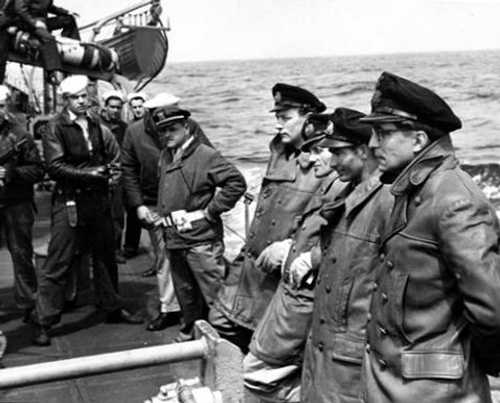 Surrender on the Atlantic

Pictured above are some officers of the German U-805 submarine aboard the USS Varian (DE-798) after their surrender on the high seas. - Note the heavy oiled leather coats, standard issue for German submariners, worn by the now POWs. The end of the war in Europe on 7 May 1945 saw many of Germany's U-boat fleet still at sea. On 12 May, Varian rendezvoused with one of these, the U-805, and a party from the destroyer escort, led by Lt. (jg.) Earle D. Stevenson, USNR, boarded the submarine and brought her to the east coast. The U-805 was operating in the West Atlantic as part of the Seewolf group, when she received orders to make for an Allied port in order to surrender. The U-boat reached Portsmouth, New Hampshire, where the crew surrendered and handed the boat over to the US Navy.