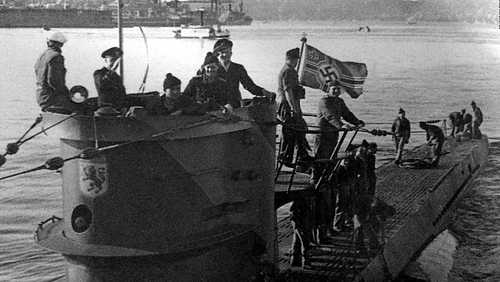 Crew members are seen on deck. German submarine U-576 was a Type VIIC U-boat of Nazi Germany's Kriegsmarine during World War II. She carried out five patrols, sinking four ships of 15,450 gross register tons (GRT)and damaging two more of 19,457 GRT. She was sunk in July 1942 by depth charges from two US aircraft and gunfire from a merchant ship, near the East Coast (30 miles from Cape Hatteras, North Carolina) of the United States. The wreck was discovered in August 2014.