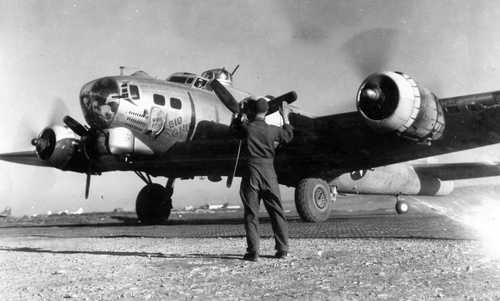 The plane which downed three Me 262s

This aircraft starting its engines over a dispersal covered by pierced steel planking at Sterparone, Foggia Airfield Complex, Southern Italy, is the Boeing B-17G-50-DL Serial Number 6405 "Big Yank" of the 5th Wing’s 483rd Bomb Group, 15th Air Force, An airplane which has an interesting history because its crew was officially credited with three Me-262 jet fighter down and another probable (record of most German jets destroyed by a single crew for the entire war) during a long mission of the 483rd Group over Berlin March 24, 1945, target the Daimler-Benz Tank Works. Tail Gunner Lincoln Broyhill recalled: «I saw four jets attacking a lone B-17 from another group. The B-17 knocked down one of the enemy fighters before it flew in a crippled manner towards the Russian lines. The remaining three fighters came at our plane. Two of them came right behind each other at my position. They were about 1000 yards away when I started cutting loose with my guns. The first (Me 262) made a pass at 200 yards and my tracers were going right into its fuselage. Suddenly it went down in flames. The second came into my sights after the first had dropped. I kept shooting away because he was getting into my hair. Suddenly, it also spiraled down. Upon hitting the ground, it burst into flames. Because I had my guns spitting lead so rapidly, they jammed». Ball-turret Gunner Cecil Shellabarger recalled: «I began shooting at the third enemy plane when it was about 800 yards away and when he came within 100 yards of our tail, he peeled off. He seemed to stand on end when all at once, he fell off on his left wing. I shot at him again and hit him between the wing and fueslage. He went down into a straight dive and about 4,000 feet from the ground, it disintegrated» (from "Big Yank"-The William S. Strapko Crew -http://www.warbirdsresourcegroup.org/URG/bigyank.html). Note on the nose a portrait of the US President Franklin Delano Roosevelt painted by Mario Rucci, an Italian artist. Named “Big Yank” by Crew Chief Irvin "Irv" Davis, the aircraft completed 50 combat missions from its base in Apulia with various crews and was subsequently selected as an Air-Sea Rescue plane and was used at least once in this role to drop a boat to a downed American fighter pilot in the Adriatic Sea. The plane survived to war and after VE-Day, May 1945, the “Big Yank” was converted for passenger use with the so-called "Homebound Airlines", part of the "Green Project " which utilized former combat aircraft returning to the USA to transport returning servicemen as well. As the 483rd BG was deactivated at Pisa, Italy, in September 1945, “Big Yank was returned to the USA and its last flight was to Walnut Ridge, Arkansas on December 28, 1945. After this date was scrapped. Victor Sierra