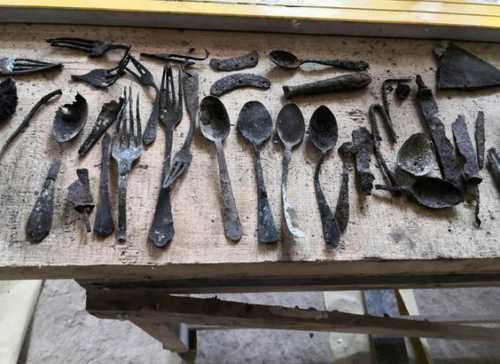 Vienna (AFP) - Renovation works at Auschwitz have turned up spoons, forks, cobbler's tools and other objects hidden beneath a chimney flue -- some that might have been used to plan escapes, a national fund said Tuesday. The objects, which also include knives, hooks, scissors, pieces of leather and parts of shoes, were found last month in block 17 of the main camp, Austria's National Fund for Victims of National Socialism said. ... The fund commissioned the renovation and restoration works in the block at the former concentration camp in Poland in preparation for an exhibition. "These utensils, kept out of sight of the SS guards, were perhaps used by shoemakers, or to prepare an escape or simply to be able to eat," fund secretary general Hannah Lessing told [url=https://www.yahoo.com/news/auschwitz-renovation-uncovers-objects-hidden-prisoners-152356774.html]AFP[/url] on Tuesday... Edited for space*