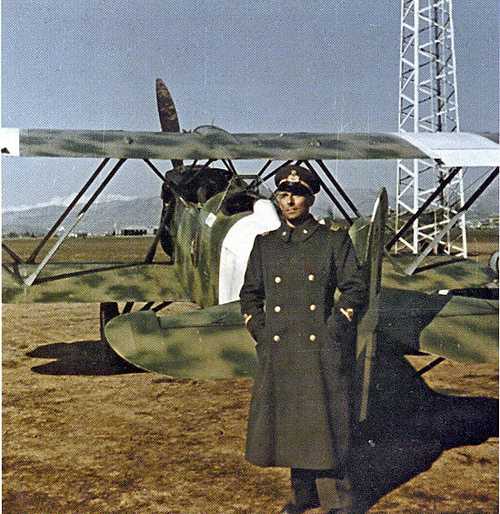 On an Italian fighter scool

An Italian Air Force’s Sottotenente (Pilot Officer/2nd Lieutenant), likely an Aeronautic Academy’s student in a fighter school on the Italian Mainland during the war years. The aircraft, completely camouflaged and with the large white bands over the wings and the fuselage adopted by the Italian school planes, is a Fiat CR.30B, tandem two seats version of the CR.30, the immediately predecessor of the well-known CR.32. The first CR.30B (B for Biposto/Two-seat) was in reality a sport aircraft built, modifying on 1933 the CR.30 NC3 (Construction Number 3), military registration MM166, for the Coppa Bibescu (Bibescu Trophy), a speed contest for Italian and Rumanian militaries crew along the route Rome-Bucharest. With the CR.30B the Capt. Baldi and the Lieut. Buffa won the Bibescu Contest on 26 September 1933: average speed over the 1,140 km of the route 356 km/h. Later when the CR.30 was superseded from 1935 by the CR.32, many of them was transformed in dual control two-seat for the fighter school airplane role. In the same time, on 1934, four CR.30B was built ex-novo from the Regia Aeronautica and delivered on 1945, plus three for Austria and ten for Hungary. The CR.30B was employed until 1943 and the Regia Aeronautica, clearly pleased by this plane, in full war asked Fiat for the construction of an additional number of CR.30B built indeed at Cameri by Fiat-CANSA between 1941 and 1943. Victor Sierra