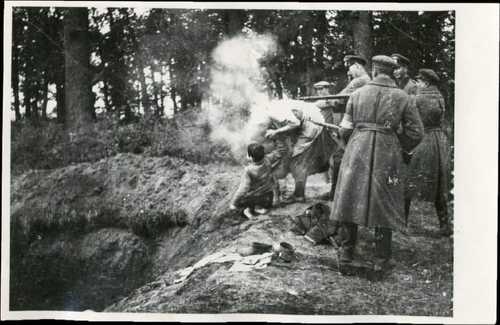 Shooting of Woman and Child in Miropol This photograph was taken by the Slovak soldier, Skrovina Lubomir, in Miropol, Ukraine in October 1941. It is one of two known photographs documenting the shooting of women and children at close range in a public park by Ukrainian policemen attached to Order Police Battalion 303. Lubomir testified in Prague in 1958 that he was in a unit guarding bridges when he and two others were assigned to attend the execution, at which 94 Jews (including 49 children) were murdered. The two shooters on the photo are Ukrainian, the 3 other Police commanders are German. Source of the photo is USHMM, originally from Security Services Archive, Prague, H-770-3.0020. taken from fb/Shadows of the Eastern front