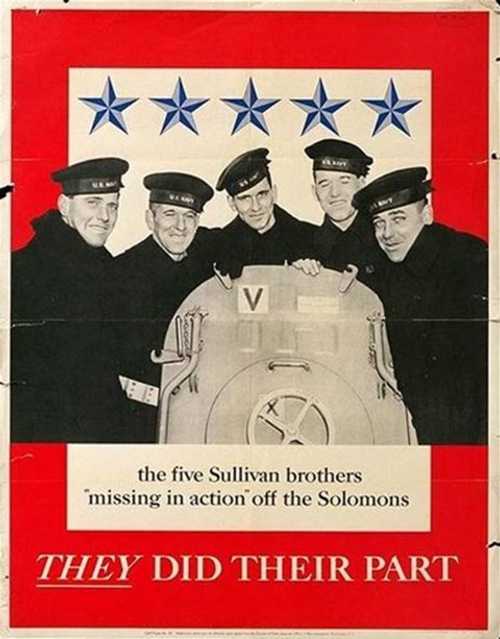 The Sullivan Brothers of Waterloo Iowa. All five perished on the USS Juneau in November of 1942 after she was torpedoed by a Japanese IJN sub. The last brother reportedly threw himself into to ocean out of despair for his fallen kin. The incident was one of the influences for Saving Private Ryan, and IIRC no brothers were allowed to serve in the same units as their kin thereafter. Two destroyers were commissioned and named after them as the first Navy ships to be named after more than one person. The Fletcher Class Destroyer (DD-537) USS Sullivans was launched in 1943 and decommissioned in 1965 and now resides not far from me at Buffalo and Erie County Naval and Military Park along with the USS Little Rock and USS Croaker respectively. George Thomas Sullivan, 27 (born December 14, 1914), Gunner's Mate Second Class (George had been previously discharged in May 1941 as Gunner's Mate Third Class.) Francis Henry "Frank" Sullivan, 26 (born February 18, 1916), Coxswain (Frank had been previously discharged in May 1941 as Seaman First Class.) Joseph Eugene "Joe" Sullivan, 24 (born August 28, 1918), Seaman Second Class Madison Abel "Matt" Sullivan, 23 (born November 8, 1919), Seaman Second Class Albert Leo "Al" Sullivan, 20 (born July 8, 1922), Seaman Second Class