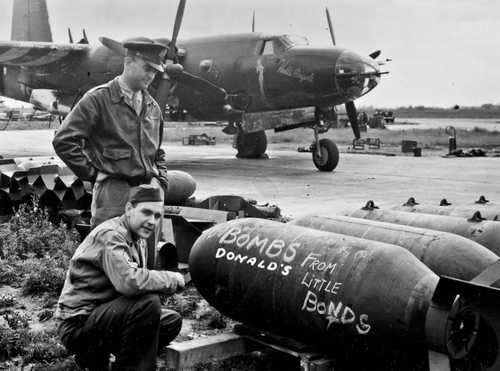 Message to the receivers down below

Crew members of a B-26 bomber named "Hell's Angels" (in the background) write a "note" to the enemy on the hull of 900 kg AN-M66 bombs. The inscription on the bomb "Big Bombs from Donald's Little Bonds" - writing refers to war bonds, that is, one of the pilots named Donald bought war bonds and, thus, kind of financed the production of these bombs. This B-26 aircraft, serial number 31615 (555 Squadron of the 386th Bomber Group of the 9th Air Army), later, on November 18, 1944, crashed while landing at the Beaumont-sur-Oise airfield (France) upon returning from bombing raid due to damage inflicted by enemy anti-aircraft artillery. All six crew members escaped, but nothing is known about the fate of the aircraft. Airfield at Great Dunmaw, UK. August 1944.