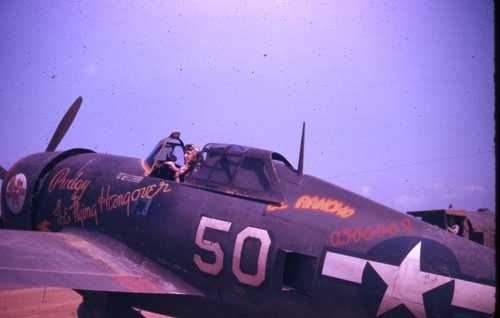 A most colorful Jug.P-47 Razorback "Pudgy, The Flying Hangover" - Clever name.Ship lost on Aug. 18, 1944 with Lt. William Bateman KIA.(rudeerude) "Pudgy, The Flying Hangover", a most colorful “Jug”, the P-47D, razor-back canopy, 42-7539 of 65th Fighter Squadron “Fighting Cocks”, USAAF’s 57th Fighter Group. The photo was took during the 57th FG’s deployment in Corsica, Alto Airfield, (from 24 March to 19 September 1944) for air-to-ground missions over the Southern France. The fate of “Pudgy” was tragic: according to Missed Air Crew Report #8095, after an attack against German military trucks, near the Durance river, in Province, August 18, 1944, his pilot, 2 Lt. William Bateman, strafing a power station, collided with a high tension line. In the impact with the terrain the plane was destroyed and Bateman was killed. The Bateman’s body was recovered by civilians French and buried on Sainte Tulle Cemetery. Victor Sierra