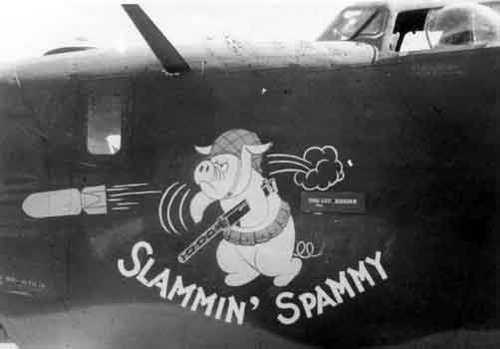 "Slammin' Spammy" ready to go into battle with US 833rd Bomber Squadron, 486th Bomber Group. "Spammy" was the wartime mascot of the Hormel Foods Corporation of Austin, Minnesota. He marks the huge contribution of the company's best-known product, SPAM luncheon meat, to the Allied war effort. This product - a pork and ham canned compressed meat preparation - was developed in the late 1930s. During the war, it was produced in enormous quantities, both by Hormel and under license. Apart from its use by US forces, it was supplied to other Allied armies for use in military ration formulations. In the Soviet Red Army the unmarked SPAM cans become known among the soldiers as "Second Fronts", so much appreciated was their contribution to keeping the Comrades marching on their stomachs. Of course, it was also appreciated by the Germans, who regarded the possible capture of stocks of the stuff as an incentive to go into battle, since it provided a welcome break from their standard "Alte Mann" canned meat rations. Mind you, the Germans also liked the British "bully beef" (canned corned beef), so they may not have been very discriminating ... Best regards, JR.