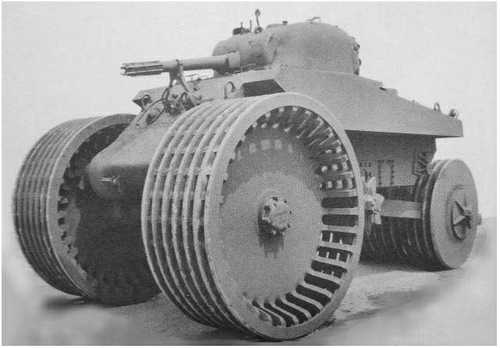 M4 Sherman medium tanks were the most numerous battle tanks used by the US and some western allies during WWII. Its productions continued from 1941 to 1945 and 49,234 units were produced. M4 Sherman tank had several variants and there were a number of M4 Sherman-based vehicles including the Mine Exploder T10. It was a remote controlled unit. Its underside was thickened with 25mm steel and the sides were adapted to give room for the huge 96 inch wheels. The rear wheel had a diameter of 72 inches. It weighed 116,400 lbs and could attain a maximum speed of 3kmph while clearing mines and 10kmph on a clear road. The T10 was tested in 1944 but was rejected due to its heavy weight and related drawbacks.