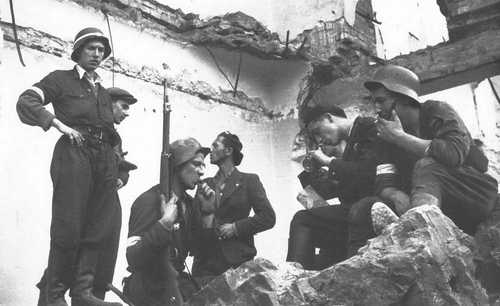 In the picture,Polish young students from the AK,are enjoying a break for a smoke.
During the Warsaw Uprising,the main force of the AK,were young people,especially students whose dreams were stopped by the reality of war,Being taught at school of the Second Republic of Poland a sincere and true love to their motherland they did they best to save Poland in those hard times.
After War,they were called "Kolumbowie"-"Generation of Columbuses"(The Generation of Columbuses is a term denoting the entire generation of Poles born soon after Poland regained her independence in 1918, and whose adolescence has been marked by the tragic times of the World War II, because when the year 1939,came they had to forget about their happy youth and start life in a wartime reality ,discovering it very painfully...)
"Bóg,Honor i Ojczyzna"
komandos10