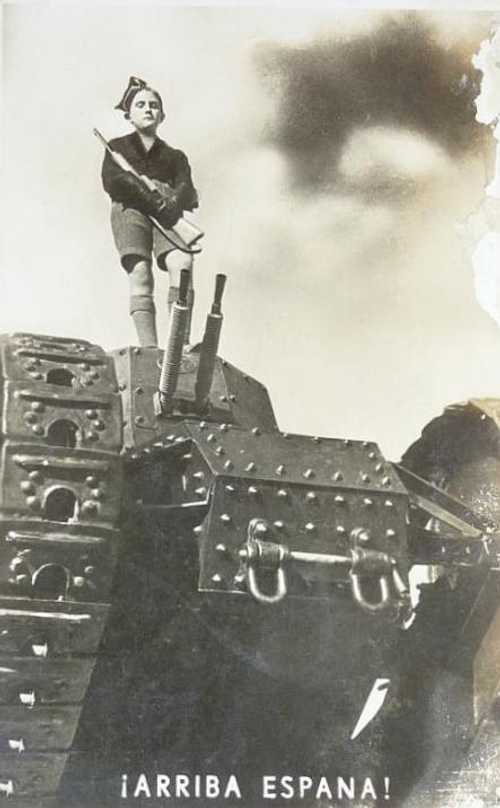 Propaganda image of Spanish Falangist Youth member standing on a Fiat 3000 Italian-manufactured tank. This is possibly a cover image from the Falangist newspaper/magazine, "Arriba Espana"; if so, a date late in 1936 is indicated. The Fiat 3000 was a development of the French FT-17 tank of WW1. The main modifications were, a slightly shorter, broader hull and prominent mudguards covering the track system. Some 1,000 of these machines were ordered by the Italian government prior to the end of WW1, after which the original order was downscaled to 100. The tank shown here appears to be an early (1921, Type A) model, armed with twin 6.5mm machine guns; the later Type B (very limited production) was armed with a 37mm cannon. The Fiat 3000 saw some action in Libya in the 1920s, and subsequently in the Second Italo-Abyssinian War (in which it was opposed by an Abyssinian armoured force consisting of one fellow-Fiat 3000 sold to Ethiopia before hostilities, and two locally-adapted armoured cars). It also had very limited employment, much later, in the course of the Allied invasion of Sicily - a local emergency measure met with zero success. However, the Italians had recognised its obsolete state well in advance of the latter engagement, and the 3000 was thus replaced by more modern (if little more effective) Italian tank designs. One point of interest in this image lies in the disagreement between sources as to whether Fiat 3000 vehicles were actually employed - or even sent - to Spain to support the Nationalist forces in the Spanish Civil War. On its face, this image suggests that at least one was - even if it was only a clapped-out example that had been campaigning in Libya, sent to the Nationalists in the main for propaganda purposes at the outset of the Civil War. Best regards, JR.