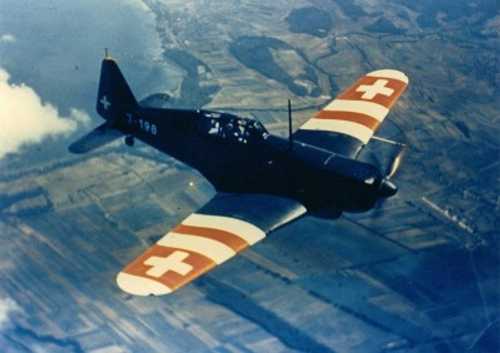 A Schweizerische Flugwaffe’s Morane D-3801, military registration J-198, flying over Switzerland. The red and white bands (Neutrality Bands) over the wings date this photo after 16 September 1944 when this bands was adopted to avoid errors by Allied planes after an incident occurred on 5 September 1944 when a Swiss Bf 109 was down by mistake by an USAAF’s P-51. The plane of the photo, delivered to Swiss Air Force on 10 September 1942, withdrawn 25 March 1958, is one of the Morane-Saulnier MS.406 built in Switzerland, Swiss Air Force military denomination Morane D-3800/D-3801, by EKW (Eidgenössische Konstruktions Werkstätte/Swiss Federal Construction Works) thanks to a license acquired on 1938. In Switzerland was built, by Adolph Saurer AG, also the engine Hispano-Suiza 12Y-31. Swiss made was also propeller, instruments and machine guns. The Swiss series production of the French fighter was split on two batches: 82 D-3800, registration J-1/J-84; 207 D-3801, registration J-191/J-297. The Swiss industries achieved also some indigenous derivate from the MS.406 built in few number or as prototypes. After the war the D-3800/D-3801 was used as fighter until, 1948, the arrival of the Mustang. Replaced in operational duties by the American fighter, the Morane remained in service as a trainer or target tug until 1959. Victor Sierra