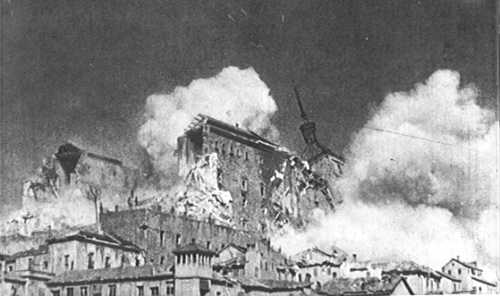 Shelling of the "Alcázar de Toledo" by Republican forces. The Siege of the Alcázar commenced and Moscardó held out for General Francisco Franco's Nationalist forces for 70 days from 22 July to 27 September 1936. Day after day, the Colonel sent out his daily radio report: Sin novedad en el Alcázar ("Nothing new at the Alcázar," or "All quiet at the Alcázar", an ironic understatement). His defiance heartened Franco's supporters everywhere and maddened the Republicans, who committed vast forces in vain assaults on the Alcázar. On 23 July, Republican forces captured Moscardó's 16-year-old son, Luis. They called the Alcazar on the telephone and Moscardó himself picked up the receiver. The political officer of the Republican force informed him that unless he surrendered the Alcazar, Luis would be shot. Moscardó asked to speak to his son. He then told Luis, "Commend your soul to God and die like a patriot, shouting 'Long live Christ King' and 'Long live Spain.'" "That," answered his son, "I can do." Luis was immediately shot. During the siege, a blindfolded Major Rojo approached the badly battered citadel with a white flag on September 9. His mission was to offer the garrison their lives if they would surrender. His proposal was rejected, but on leaving he asked Moscardó if he could convey any requests to the outside. Moscardó asked that a priest might be sent to the garrison to baptise children born during the siege. The Republicans agreed and sent in Canon Vasquez Camarassa. Of the priests in Toledo, only seven who were in hiding escaped massacre by the Republicans, so the Canon was in that respect lucky to be alive, said to be because of his left-wing sympathies. He urged the civilians, the women and children in particular to leave under a white flag. The unanimous reply was a refusal. When the Alcazar was finally relieved, Moscardó is said to have greeted the relief National force's commanding Colonel. He had lost his son but saved his garrison. He stood stiffly to the salute and said, "No change to report."