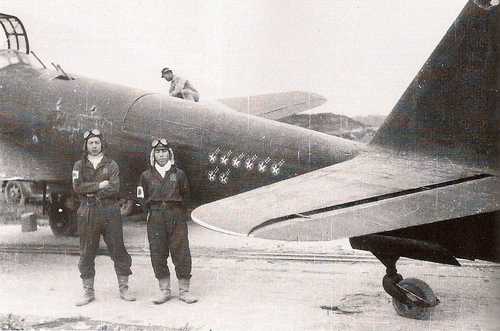 The cew of Nakajima J1N1-S Gekko Model 11, "Red Yo-101" equipped with the FD-2 radar belonging to the Yokosuka Kokutai. Its crew consisted of Chief petty officer Yuzo Kuramoto and Ensign Shiro Kurotori. The crew are credited with 6 aerial victories all B-29s, this is proudly displayed on the port fuselage side of the aircraft. Six american stars in the upper row indicate confirmed victories, 1 B-29 shot down on April 16th, 1945 and on the night of 25/26th of May of 1945 the crew managed to down 5 B-29s in one night. The 2 stars on the bottom row indicate damaged B-29s. Picture taken at Oppama Air Base, Japan, June 1945.