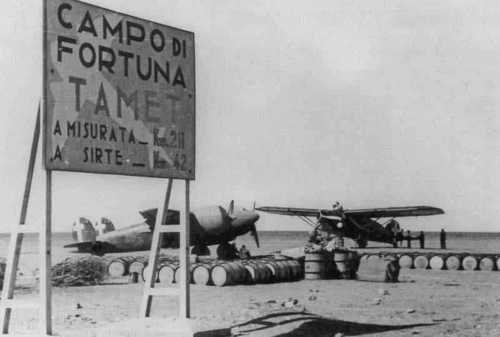 Landing field in the desert

The Tamet’s Campo di Fortuna (emergency landing field), placed near the Uadi Tamet away farter 200 km East from Tripoli and not distant from the Sirte Gulf, one of many landing field built by Italians in Libya few times before the outbreak of the WW2 for fast deployment of air combat units beyond the border with the Egypt. Building this landing fields was quite easy because the ground nature, straight and without large obstacles, but, after the outbreak of the hostilities, a serious problem, moreover in common with the other belligerent in the Libyan and Egyptian desert, was their visibility from above and the camouflage adopted often ineffective, a part the sand raised by the aircraft and well visible also on great distance. Other problems was the lack of effective telecommunications and, other serious problem in common with the other belligerent, the water supply. Coming back to our photo, notice the large white metal panel: CAMPO DI FORTUNA (letter’s color likely black) TAMET (letter’s color likely red) with the distance’s indication: A MISURATA (To Misurata) km 211 and A SIRTE (to Sirte) km 42. (letter’s color likely black, number’s color likely red). Usually, before the outbreak of the war, the airfield’s name, and also in Italian mainland, were repeated with large white concrete letters visible by above. Obviously this practice was abandoned with the entry in war. The two airplanes of the pictures are well interesting being both “rare birds”, “rare” obviously for who didn't know all the Italian aircraft of Thirties and Forties. The twin engines is the disastrous attack plane Breda 88, grounded immediately few mission’s attempts and employed as dummy aircraft for decoy the enemy reconnaissance (but the picture’s plane is covert by canvas and indeed is still, at least officially, in service. The other is an old former recce aircraft Caproni Ca.111 phased out from operational service and employed for non-active duties as courier, liaison and light transport airplane. Both the aircraft has the white cross on the tail adopted at the outbreak of the war to avoid mistake with the French and British planes. So this photo, and also for the presence of a still “active” Breda 88, date from the first weeks of the war, early Summer 1940. Victor Sierra