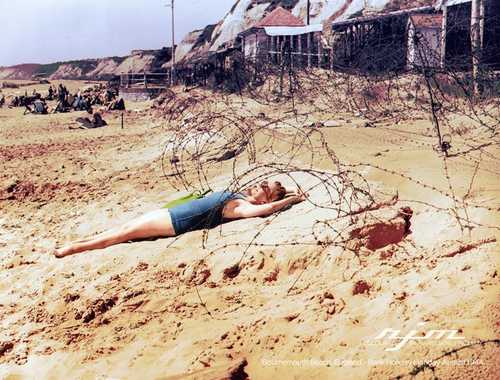 Time to relax and sunbathe on the beach at Bournemouth, Dorset, UK, on Bank Holiday Monday, 28 August 1944. As part of the British anti-invasion preparations in 1940, beaches were blocked with entanglements of barbed wire, usually in the form of three coils of concertina wire fixed by metal posts, or a simple fence of straight wires supported on waist-high posts. (In the United Kingdom and Ireland a bank holiday is a public holiday, when banks and many other businesses are closed for the day. The Late Summer Bank Holiday falls on the last Monday in August Colour by RJM /taken from fb /WW2 colorised