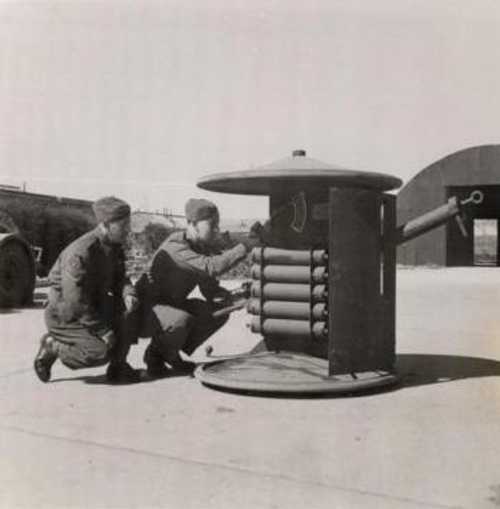 Interesting 'photo of British LDF men crewing a Smith Gun, a cheap replacement intended as a stopgap replacement for the antitank artillery lost at Dunkirk and earlier in the Battle of France. The War Office was not enthusiastic; but Prime Minister Churchill insisted, so it went into production. The Smith Gun was a 3-inch grenade launcher, firing high-explosive, incendiary and antitank grenades. The barrel was offet to the left (from the operator's viewpoint) allowing an ammunition rack (clearly seen here) to be mounted on the right. The gun could be wheeled into place using its "roof" and "base plate" as wheels; when in position, it was tipped sideways onto the flat wheel designated to act as base plate, upon which the weapon could be rotated through 360 degrees. The Smith Gun was not very good. A range of up to 500 yards has been claimed for it; but most opinion was that its effective range was little more than 100 yards. Also, while the judgement of one historian of the Home Guard to the effect that it had "an alarming tendency to kill its own crew", the use of the Smith Gun could be risky in itself to the operators. One reason was the grenades supplied were often faulty. Another was that - befitting a design from the man who designed the children's assembly kit toy, "Meccano", the weapon was supplied to users in dismantled kit form for assembly; and Home Guard units, in particular, often made dangerous mistakes in assembling it. The results could leave users in much worse condition than their targets. The Smith Gun was originally intended for supply to the British Army, but was quickly overtaken by more effective antitank guns of the conventional type (the 6-pounder in particular). The weapon was then distributed to some second-line army units guarding RAF bases and - very widely - to the Home Guard, with whom it was (incredibly enough) quite popular. The Smith Gun (perhaps fortunately for the British) never saw action, and was declared obsolete at the end of the war. Best regards, JR.