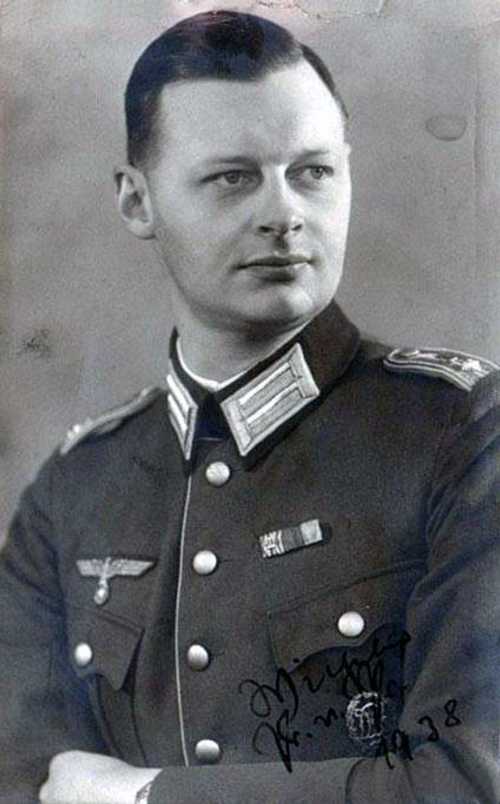 Wilhelm Friedrich Franz Joseph Christian Olaf, Prince of Prussia, as a lieutenant of the Heer 1st Infantry Division, 1938. Prince Wihelm was the eldest son of the German Crown Prince Wilhelm ("Little Willi"), and therefore second in line to the Royal and Imperial throne of the Hohenzollerns. That throne was abdicated by the Kaiser (under duress) in 1918, but the old man continued to harbour hopes of a restoration of the German Monarchy. Prince Wilhelm, however, stepped decisively out of the line of succession in 1933 when he renounced his right to the throne in order to marry a member of the minor German nobility, a match of which his grandfather, in particular, disapproved (making comments to the effect that a "thoroughbred" Hohenzollern's marriage to this lesser class of "horse" could produce only "mongrels".). Unlike some of his close relatives, Prince Wilhelm does not seem to have taken any definite position for or against the Nazis. He did, however, elect to march with his regment when war came (unlike most young men in his position, he would have had the choice). Prince Wilhelm of Prussia, Oberleutnant, 1 Inf. Div., was mortally wounded in action near Valenciennes, France, 23 May, 1940, on which date his division was involved in fierce fighting with French forces. He died of his wounds in a military hospital at Nivelles on 26 May, on which date his death was officially recorded. Best regards, JR.