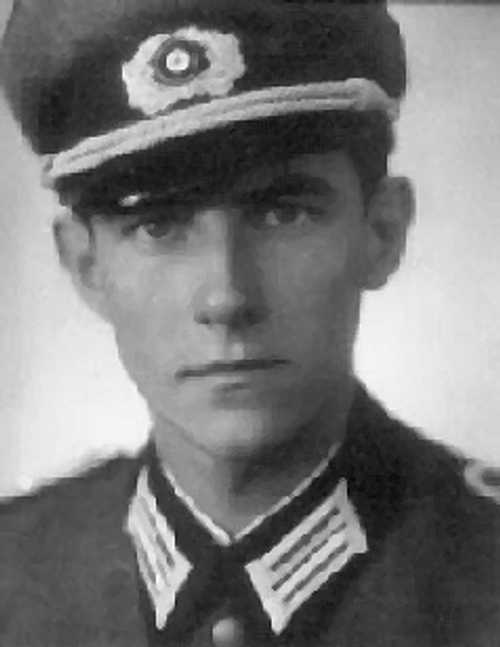 On November 12, 1944, Lt. Friedrich Lengfeld was commanding a beleaguered German rifle company. Like most units on both sides, he had suffered heavy casualties. Early that morning, a wounded American could be heard calling from the middle of a German minefield in a no man's land separating the combatants. "Help me" the man cried. His unit had withdrawn , however, and no U.S. troops were close enough to hear. Lengfeld ordered his men not to shoot if Americans came to rescue the man. But none came. The soldiers weakening voice was heard for hours. "Help me" he called, again and again. At about 10:30 that morning, Lengfeld could bear the cries no longer. He formed a rescue squad, complete with Red Cross vests and flags, and led his men toward the wounded American. He never made it. Approaching the soldier, he stepped on a land mine, and the exploding metal fragments tore deeply into his body. Eight hours later Lengfeld is dead. The fate of the American is unknown. Much of this story, unpublished in any American books on the war, is based on the eyewitness account of Hubert Gees, who served as Lengfeld's communications runner. Speaking at the monument's dedication in Germany last October, Gees said : " Lieutenant Lengfeld was one of the best soldiers of the Hürtgen Forest. He was an exemplary company commander, who never asked us to do more than he himself was ready to give. He possessed the complete confidence of his soldiers. Ruggles said Lengfeld's sense of duty went far beyond the call. " You can't go to any greater extreme than to give your life trying to rescue someone you are fighting as your enemy in war " he said. " Compare that to the indifference most people feel about each other today." The bronze and concrete monument is believed to be the only one placed by Americans in a German military cemetery. In both German and English, the plaque reads : Here in the Hürtgen Forest, on Nov. 12, 1944, Lt. Friedrich Lengfeld, a German officer, gave his life while trying to save the life of an American soldier lying severely wounded in the 'Wilde Sau' minefield and appealing for medical aid." To the young Lieutenant, the voice crying out that day did not come from an enemy. Nor from an American, nor a stranger. It came from a human being in need. Something inside Lengfeld compelled him to act - a feeling so strong and enduring not even the madness of war could block it. In the heavy silence of the German forest, where thousands upon thousands met death, that glorious impulse for life is now honored.