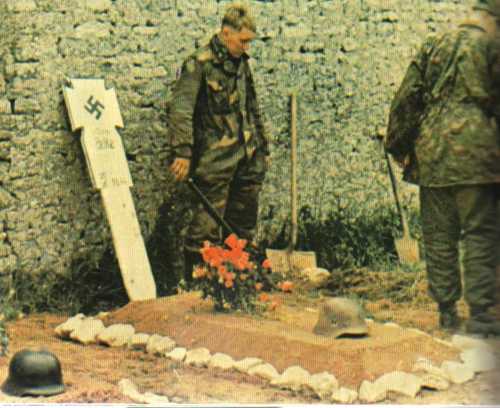 Young soldiers of the 12th SS-Panzer-Division "Hitlerjugend" are paying one's last respects to their fallen comrades by putting them to eternal rest. Notice the different camo-patterns of the soldiers: the right one is wearing rauchtarn-muster (smoke-camo pattern) in summer version. The soldier to the left with the shovel is wearing a complete battle suit in so-called Italian camo pattern. this cloth actually was confiscated from the Italian army when it was disarmed by its former ally Germany. Due to lack of own resources Wehrmacht and Waffen-ss troops were supplied with this camo-pattern. Normandy, summer 1944.