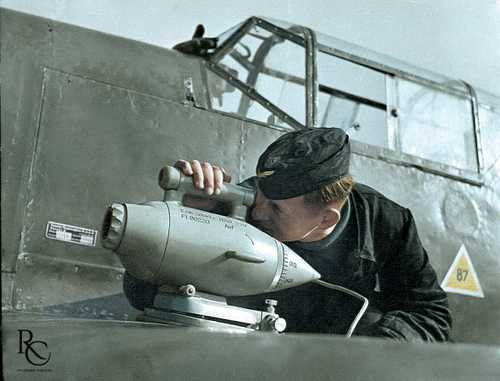 A Luftwaffe’s ground crewman installs an Zeiss Ikon ESK 2000 B aircraft camera on the wing of a Messerschmitt Bf 109. These cameras were initially mounted on the wings or fuselage of aircraft and used in the training of future pilots. Later, during the war, they were mounted on the nose of aircraft such as the Me 110 and 210 and used as gun cameras. Given the position of the fuel filler point below the cockpit, the shape of the later and the absence of an opening on the upper panel (near the glove), I believe this Bf 109 to be an early B-1, one of only 30 B-1 built. The photo is undated and it can be either pre-war or war period given that outdated aircraft were often used by training units. Original: unknown/taken from fb/WW2 Colourised photos