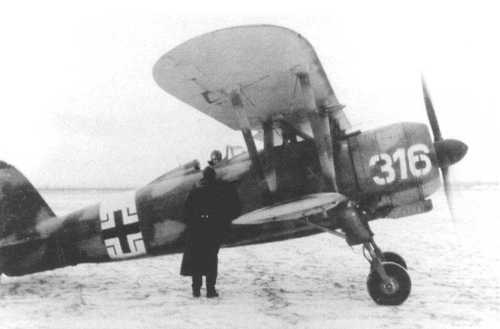 New life with the Luftwaffe

Completely outdated as fighter aircraft, after 1943 the Italian biplane Fiat CR.42 surprisingly knew a new life into the Luftwaffe. On the model of the Soviet Forces, the Luftwaffe in fact established some units (Nachtschlachtgruppen) for night harassment beyond the Allied lines and anti-partisan roles equipped with various type of airplanes some outdated, but well suitable for this type of missions. Moreover the Russians employed as night harassment plane behind German lines most biplanes Po-2s. An airplane’s type choose by the Luftwaffe was precisely the CR.42 and the German Rüstungs-und-Kriegsproduktion Stab – which took control of Italy's aircraft industry after the Italy’s armistice of 8 September 1943 - ordered 200 Fiat CR.42LW (LW=Luftwaffe) equipped with exhaust flame dampers and armed with the two classic 12.7 mm Breda-Safat machine-guns and under wing bomb racks for four 50 kg bombs. After the Allied heavy destroyed several completed and semi-completed aircraft on the production line, the CR.42LWs completed was 150 and the planes accepted into services by the Luftwaffe was 112. The Nachtschlachtgruppen (NSGr.) which employed the CR.42LWs was above all the NSGr 9 and NSGr 7 plus the Jagdgeschwader 107. The latter flew anti-partisan missions in France, while the NSGr 9 and NSGr 7 served the first in Italy for night harassment missions beyond the Allied lines, included the Anzio’s landing head, the second for anti-partisan missions in Croatia. Victor Sierra