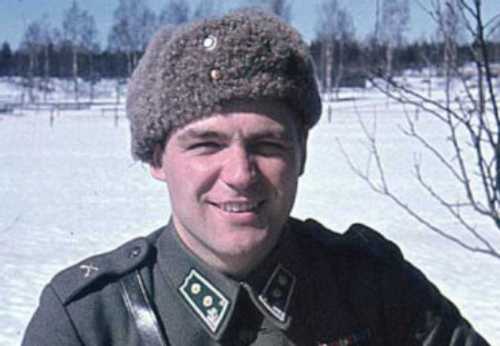 Lieutenant Harry Järv (1921-2009) from Finland's Swedish speaking region of Ostrobothnia. He participated in the Winter War as 18 year old volunteer and later in Continuation War served as platoon leader in Swedish speaking Infantry Regiment 61, commanded by Lt. Col. Alpo Marttinen. Harry Järv specialized in patrol activity and led several recon and combat patrols behind enemy lines. On September 4, 1943, he was wounded by a landmine while on a patrol, and spent rest of the war in a hospital in Sweden. He carried a camera with him through out the war and took pictures which he later published in books that he wrote. In 2004 movie named "Framom främsta linjen" (English: Beyond Enemy Lines) was made, which based on expiriences of Harry Järv and IR 61 at Svir river and Karelian Isthmus in 1942-1944. Harry Järv died on December 21, 2009 in Stockholm, Sweden, where he lived all his years after the war.