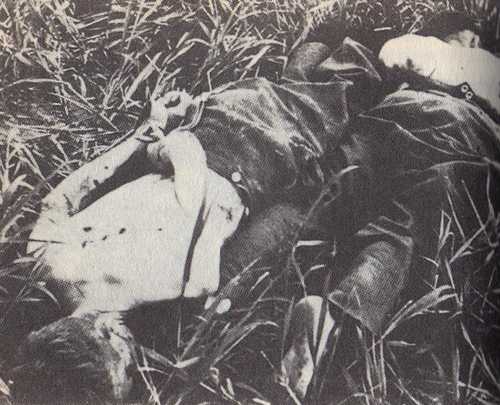 July 1, 1941: during the German advance through the western Ukraine soldiers of II. battalion/Infanterie-Regiment 35 (mot.), 6th/IR 119 (mot.) and 5th/Artillery-Regiment 60 were encircled by the counter-attacking 20th Armoured Division of the Red Army. The Germans surrendered after they used up all of their ammo supply. The surviving app. 180 Germans were forced to undress themselves, then their hands were tied upon their backs. Eventually all of them were stabbed (see left body in the photo), shot or blown up with bundles of hand grenades. The dead were recovered the next day by the recce battalion of the LAH. No leading Soviet officers were ever accused.