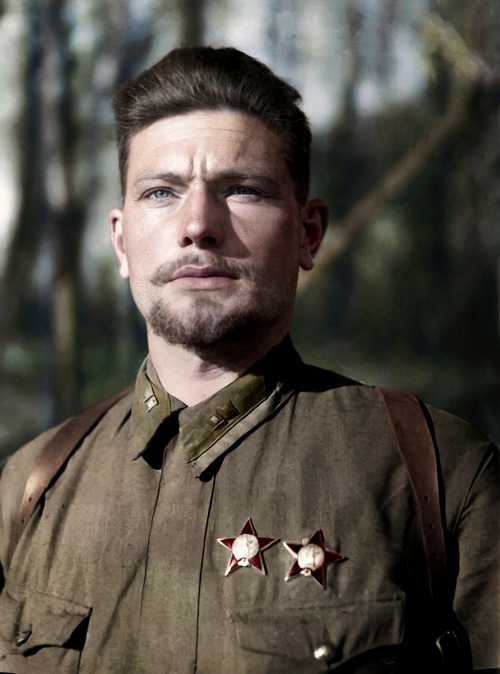 Vasily Martekhov was born on April 1, 1917 in the USA, Ohio, in the family of an emigrant miner from Russia. In 1921 the family returned to the homeland. In the Red Army since 1939. In 1941 he graduated from the Kharkov Tank School. Since July 1941 he participated in the battles of the Great Patriotic War. In September, he was seriously wounded, but soon returned to the front. Participated in the battles at Stalingrad. At the station Morozovka, as part of a group of 5 tanks, broke into a German airfield and at point-blank range shot the enemy's aircrafts. November 19, 1942, his company after a quick attack was the first to break into the location of the enemy's defense. January 26, 1943, Marthekhov was the first in his tank to join the tankmen of the 62nd Army. Participant of the battle on the Kursk Bulge near Belgorod. From July 5 to July 12, 1943, a tank company under his command in the Shebekinsky district of the Belgorod Region destroyed 3 tanks, 6 self-propelled artillery units, 3 mortars, 8 cannons and 300 enemy soldiers and officers. Vasily Martekhov was killed in action on July 12, 1943 near the village of Voznesenovka, having ambushed and entered into battle with several enemy tanks. He was buried on the battlefield, later his ashes were transferred to a common grave in the village of Voznesenovka. Vasily Martekhov destroyed 14 tanks, 22 guns, 19 mortars, 16 motor vehicles, 7 machine-gun points and over 800 enemy soldiers and officers.