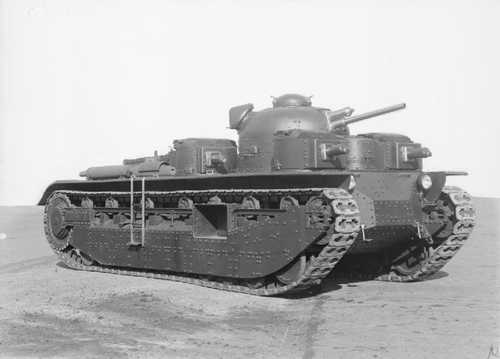 It should not, perhaps, surprise that the British were the first to pursue the concept of heavy breakthrough tank/land warship in the interwar period ... and the first effectively to abandon it. The earliest development of tanks was significantly influenced by the Royal Navy, and combined the basic concept of an armoured mobile machine gun platform with "landship" notions from the start. Late in 1922, the War Office commissioned the Vickers firm to designe a new heavy tank as replacement for the final WW1 type, the Mark V heavy tank (the original replacement, the Mark VIII, had been built in very small numbers and mainly by the USA under licence, production having been aborted by the end of the war). Constrained by postwar restrictions on military expenditure, design and development work continued slowly. The single A1E1 Independent prototype, shown here, was finally built by Vickers in 1926. The result was in many respects far in advance of the old Mark V Heavy. Main armament was now in a fully rotating main turret, and the engine was rear-mounted - perhaps reflecting the influence of the French Renault F-17, arguably the first "true tank". Engine, suspension, drive train, road wheel system, brakes and internal communications system all represented distinct advances on the Mark V. Unfortunately, for most of these advances, aspiration exceeded the scope of technological execution. Most of these systems exhibited serious problems in trials, not least because all were put under substantial stress by the tank's weight of 32 Imperial tons. The Mark V had been only 3 tons lighter, and the Mark VIII, at 37.5 Imperial tons, was actually heavier; both, however, were ponderously slow, and the V12 engine of the A1E1, while more advanced, was somewhat restricted by the constraints of true rear-mounting. Also, trials disclosed that the tank was disproportionately long for its width, creatiing handling difficulties. Finally, the difficulties of commanding a multi-turreted vehicle, a feature of other interwar breakthrough tanks, began to become evident in the A1E1. It is quite possible that many of these difficulties could have been resolved in time, resulting in a reasonably effective breakthrough tank. Given the fundamental weaknesses of the concept, it is perhaps just as well that increasing financial constraints resulted in the abandonment of the programme in 1929, having cost the (at the time) the staggering sum of Stg£150,000. The money was, however, far from a dead loss, as many of the tank's advanced features, with further development, contributed to the designs of later British tanks and, indeed, of tank design generally. The lone prototype stayed at Bovington Camp, and passed in time into the collection of the Bovington Tank Museum, Dorset, where it is still preserved. It even saw "action", in a manner of speaking. At the outset of WW2, the old girl was trundled out and set to "guard" the approaches to the Bovington and Lulworth installations. Fortunately, perhaps, the Wehrmacht never came ... Best regards, JR.