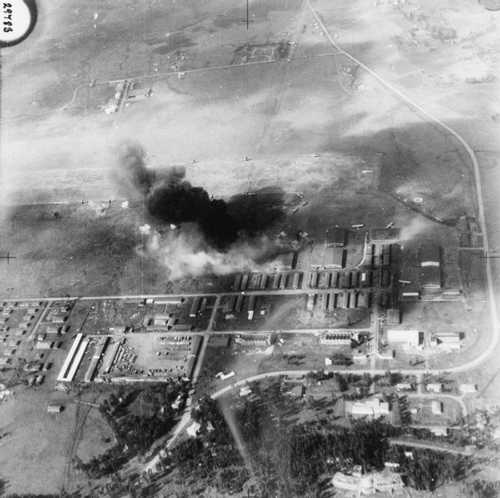 Bombs explode on buildings and Italian aircraft, note some Caproni Ca.133, at Addis Ababa airfield during an attack in poor weather by five Vickers Wellesleys of No. 223 Squadron RAF Detachment based on Perim Island in front to Aden. According the IWM’s caption the Squadron destroyed two hangars and five aircraft with another two badly damaged. During the raid four of the Wellesleys were hit (one badly) by anti-aircraft fire, and they were also subject to a determined attack by a lone Italian fighter. At the date, 10 June 1940, of the Italy’s entry in the war the No 223, equipped with Vickers Wellesley from June 1938, was based at Summit in Sudan. In August 1940, the squadron moved to Perim Island at the start of the Italian invasion of British Somaliland from where on 18 August some of its Wellesley bombed the Italian airfields at Addis Ababa, destroying a number of aircraft including the Duke of Aosta's personal aircraft (the Savoia-Marchetti S.79 I-ABNE). Likely this photo concern the 18 August’s raid. Victor Sierra