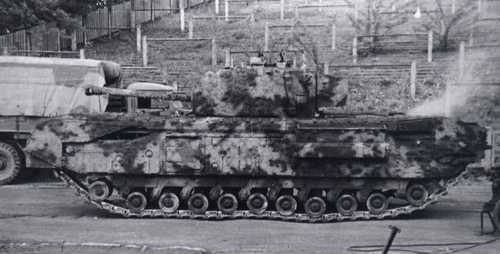 David Fletcher's excellent "Mr Churchills Tank, The British Infantry Tank Mk. IV, Schiffer, 1999" has this bizzare picture on page 190 of a Churchill VI carrying the British attempt at Zimmerit combined with a German paint colour; really superb camouflage effect that underlines one advantage of Zimmerit, the 'matting' effect, though the British said rough or smooth didn't matter in terms of anti-magnetic protection: Apparently the intention was to put this British zimmerit into full production and then the war ended. Australia received a batch with the coating shipped separately, they chose not to bother. Mr Fletcher notes one side-effect, when a flamethrower was used on a coated and uncoated tank, the uncoated got hot enough inside to ignite the ammunition while the coated one remained 'bearable'. Colorisation not possible seeing we dont know what the colours are?